A Hoosier cabinet is a type of cupboard or free–standing kitchen cabinet that also serves as a workstation. It was popular in the first few decades of the 20th century, since most houses did not have built–in kitchen cabinetry. The Hoosier Manufacturing Co. of New Castle, Indiana, was one of the earliest and largest manufacturers of this product, causing the term “Hoosier cabinet” to become a generic term for that type of furniture. By 1920, the Hoosier Manufacturing Company had sold two million cabinets. 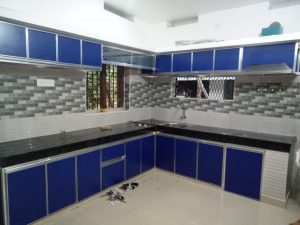 They peaked in popularity in the 1920s, and declined as homes began to be constructed with built-in kitchen cabinets and counter tops. The Hoosier Manufacturing Company was sold in 1942 and liquidated. Today, Hoosier cabinets are valued by antique collectors.

Around the 1890s, several furniture manufacturers in Indiana discovered that a stand-alone kitchen cabinet with storage and a workspace (essentially a baker’s cabinet with extra storage) was easy to sell. It was a kitchen workstation with ingredient and equipment storage where the cook could complete all food preparation and not move until it was time to cook the food. The Hoosier Manufacturing Company was one of those early manufacturers. In 1900, the company moved a short distance from Albany, Indiana to New Castle, Indiana. It began improving its manufacturing and distribution process, and was a strong believer in advertising. By 1906, it had 146 employees.